About Days of Rage

Days of Rage is a web exhibition that enlivens historical activist posters from ONE Archives at the USC Libraries through tactile analysis and storytelling. Grounded in the experiences of activists and graphic designers Alan Bell, Daniel Hyo Kim, Chandi Moore, Silas Munro, Judy Ornelas Sisneros, and Jordan Peimer, the exhibition positions LGBTQ+ graphic design as embodied in community realities and histories, producing subjective reflections on the interdependence of design and activism. In assembling the exhibition, these community experts chose five posters from the recently digitized poster collection at ONE Archives at the USC Libraries. Over a sequence of stylized videos that emphasize the choreography of their hands, the invited experts reflect on their selections, allowing the posters to guide ruminations on design language, community responsiveness, erasure and history, and the affiliative force of activist politics. Their hands, voices, and memories serve as interpretive guides in transmitting knowledge, thereby queering the mode in which graphic design is displayed–which is so often static and wall-bound. From bold graphic declarations of community activation to explicit safer sex health campaigns, the posters discussed run the affective gamut, bringing up powerful feelings of rage, joy, and sorrow. Days of Rage privileges this associative and sometimes aleatory interpretation of design, and finds profound value in its capacity to serve as a roiling, continuous link to a shared sense of LGBTQ+ ancestry and struggle.

The exhibition is curated by Andy Campbell, Associate Professor Critical Studies at the Roski School of Design, University of Southern California (USC), and co-curated by Tracy Fenix and Austen Villacis, current students in Roski’s Curatorial Practices and the Public Sphere graduate program.

About ONE Archives Foundation

Founded in 1952, ONE Archives Foundation is the oldest active LGBTQ organization in the United States, and is dedicated to telling the accurate stories and history of all LGBTQ people and their culture. As an independent nonprofit, ONE Archives Foundation promotes ONE Archives at the USC Libraries — the largest repository of LGBTQ materials in the world — and provides innovative educational initiatives, public exhibitions, and community programs. The curatorial and educational choices made by ONE Archives Foundation are guided by our commitment to social equity and justice. We engage with the complexity of LGBTQ history and representation through highlighting the intersectional and authentic narratives of Black, Indigenous, people of color (BIPOC), women, gender-nonconforming and transgender people, people of various abilities, youth, and elders across all socio-economic classes.

The Protest Sign Font utilized on the Days of Rage exhibition website is created by GenderFail. GenderFail is a publishing, programing and archiving platform run solely by Be Oakley. The font is licensed for noncommercial usage.

Andy Campbell is an Associate Professor of Critical Studies at USC’s Roski School of Art + Design. He is the author of Bound Together: Leather, Sex, Archives, and Contemporary Art (Manchester University Press, 2020), Queer X Design (Black Dog and Leventhal, 2019), and the co-editor of the exhibition/archival anthology Queer Communion: Ron Athey (Intellect, 2019).

Studio Lutalica are a design and consultancy agency for feminists and queers, run by feminists and queers. But just because we’re proud of our identities, doesn’t mean we’re an exclusive club! We work with brands, organisations and individuals who share our commitment to improving the lives of women and the LGBT+ people.

Umi Hsu is a public humanist and strategic designer with research and organizing agendas for equity in arts, technology, and civic life. They are the Director of Content Strategy at ONE Archives Foundation. Previously, they directed digital and data programs. Umi has a PhD in Critical and Comparative Studies in Music from the University of Virginia.

Tracy Fenix is a curator, archivist, and land steward. They hold a BA in Anthropology from the University of Texas at Austin. They are currently a dual degree Masters candidate in Urban Planning and Curatorial Practices and the Public Sphere program at USC. They recently worked as the Artist Engagement and Archive Manager at Visual AIDS, where they initiated and organized the Archive Committee to re-envision the Archive Project’s collection management. They nourish eco-sensual relationships to people, places and shared collective public knowledge.

Austen Villacis is an arts worker based in Los Angeles. He holds a BA in Art History from Texas State University, and is currently a Masters candidate in the Curatorial Practices and the Public Sphere program at USC. His interests range from issues in and around digital mediation, to critical archival practices and AIDS activist collectivity.

Angelina Jesson (b.1995, London) is an English visual artist living and working between London and Los Angeles. Working within mediums of performance, film and installation, I explore the role myth and narrative have in shaping identities, communities, history and modern-day cultural values.

askone@onearchives.org
Back to Activist All posters

Ray Navarro was a Chicano artist and activist based out of Los Angeles and New York. Known for his particular brand of irreverent humor and activism, Navarro, along with a group of other artists and activists, formed an affinity group within the AIDS Coalition to Unleash Power (ACT UP) called Damned Interfering Video Activist Television (DIVA TV). The collective produced videos including Like a Prayer (1989), referencing Madonna’s eponymous song, which documented Navarro dressing as Jesus at ACT UP’s ‘Stop The Church’ action–a protest at St Patrick’s Cathedral in New York City of Cardinal John O’Connor, who had publicly denounced HIV/AIDS education and condom distribution.

DIVA TV often used music in their videos, with the stated intention of leveraging the burgeoning genre of the music video toward their own activist ends. Navarro died from AIDS complications a little under a year after Like a Prayer was produced. The collective dispersed shortly thereafter, but not before they made a tribute video to Navarro’s life. The video includes footage of Navarro leading crowds of protesters in a wheelchair as Sylvester’s “You Make Me Feel (Mighty Real)” plays in the background. Sylvester, also known as the Queen of Disco, was an accomplished singer-songwriter best known for their disco hits in the 70s and 80s. Sylvester died in 1988 from AIDS complications.

These posters, with their tombstone-like dimensions, likely served as a way to honor Sylvester and Navarro at protests after their deaths. As an ultimate reminder of both the ongoing urgency of HIV/AIDS activism and education, as well as activist collectivity, a list of protest chants that the activist holding Navarro’s poster might have read from is adhered to its back, along with Gran Fury’s iconic graphic of a bloodied hand: 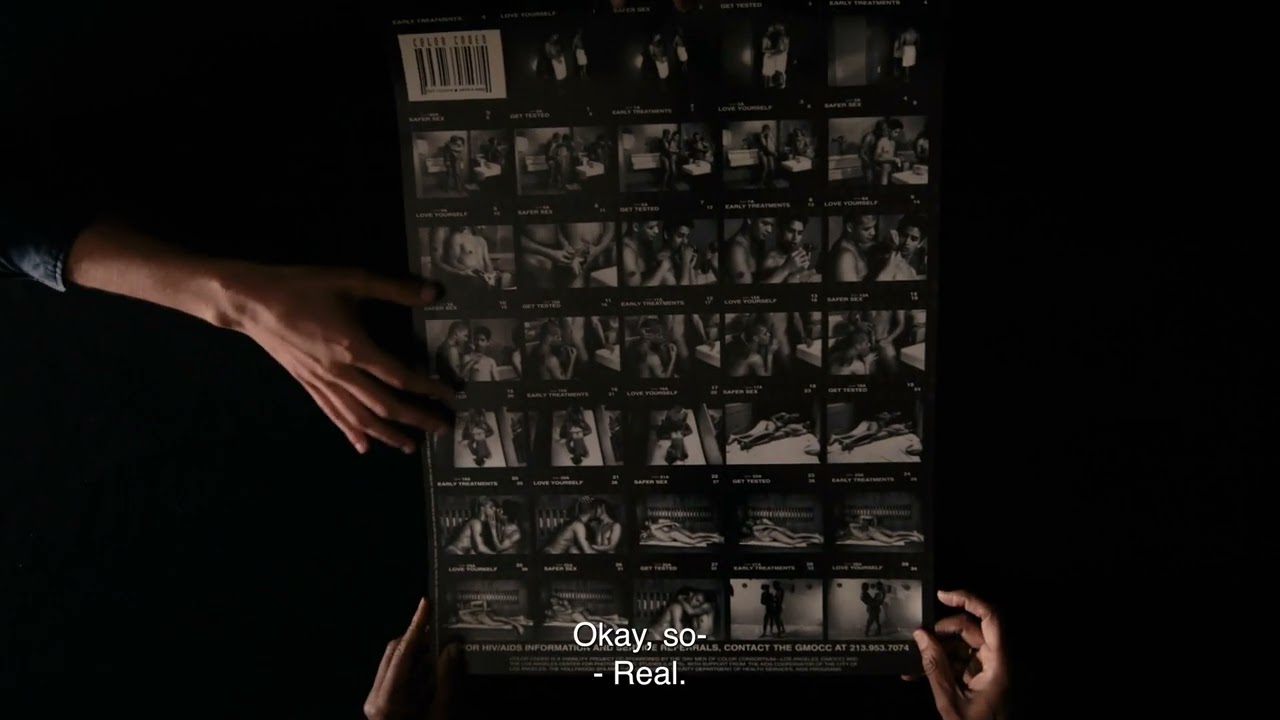